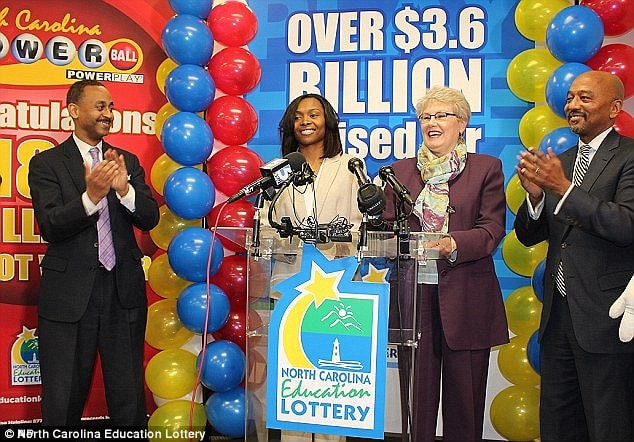 Now, normally, one would say that any winner of a lotto jackpot as big as this would be set for life, and it would be true too, in most circumstances – but only as long as you manage your winnings correctly.

What you don’t want to do is to be like Marie Holmes (shown in the picture above), the single 26-year old mom of four children who won a Powerball ticket worth $188 million in 2015.   One would have thought that Ms. Holmes would spend the money wisely and invest it well, in order to take care of her children.

But no, the young woman spent a total of $21 million of her precious earnings on bailing out her boyfriend, a drug trafficker by the name of Lamarr McDow, from jail – not once, but thrice! Clearly, it won’t be long before Ms. Holmes will be out on the streets once again, left to fend for herself, if she continues in this self-destructive mode.

A lot of lotto winners are completely unprepared for the sudden wealth that winning a Powerball or Mega Millions or euromillions jackpot would throw their way. You will be shocked at the findings of the National Endowment for Financial Education which has found that 70 percent of lotto winners end up wasting away their lottery winning earnings within just a few years of their win. There was a couple from Riverside, for example, m who won $3.8 million in 1989 and were in bankruptcy court 6 years later!

The only way your money will last after winning a lottery is to spend it wisely. A lot of lottery winners have done just that. Consider Flora Marseilles, a 75-year-old lottery winner from Ohio who won a $15 million jackpot in 1999. Today, Flora is comfortably retired, and lives off the interest from her winnings. She says the smartest thing she did was to get a financial advisor to help her invest her money wisely.

In fact, a lot of lottery winners prefer to go off quietly into the sunset, away from all the media attention. They would rather invest their money in safe havens and live off the interest for the rest of their lives. That is certainly the way to do it.

There was, for example, a man from San Francisco, B. Raymond Buxton, who won a huge $242.2 million Powerball jackpot in 2014. He did not claim the prize till he was backed by a financial advisor, a lawyer and a media consultant.

Some of the smart lotto winners

That is how you should be after winning a lottery. You should hire the right experts to tell you exactly how to invest the money so that it would last you for as long as you’re alive.   A good financial advisor will help you invest conservatively, so that you take no investment risks of any sort. Play powerball Jackpot online Now!!!

The smartest lottery winners, such as Roberto Moreno, 64, of Jurupa Valley, who won a lottery of $750,000, use the money to fund their existing businesses. They don’t stop working just because of winning a jackpot, but invest the money into their business so that they can profit from the growth in profits later.

There are others like Jack Long of Fontana, California, who use their winnings purely for the purpose of charity. Mr. Long has given away a significant part of his winnings of $60 million from a 2014 Powerball jackpot to help the underprivileged in his community. This is a very noble objective indeed.

You can be a winner of a Powerball lotto or a Mega Millions lottery prize as well. Just keep playing through buyonlinelotto.com