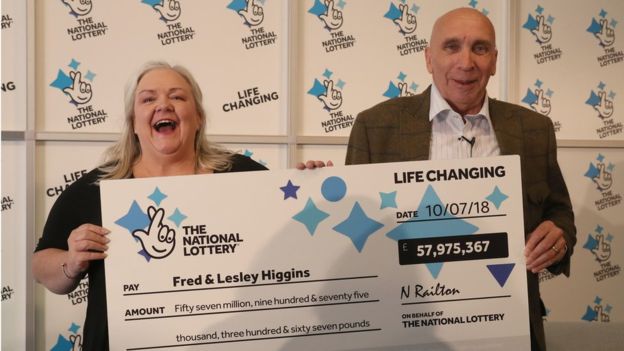 A Scottish couple win £57.9 million on EuroMillions lottery despite of accidently ripped up lottery ticket and thrown in the bin. The couple has almost denied the enormous jackpot knowing that ticket has been torn out.

When lucky Fred Higgins take his ticket to local Scotmid store in Aberdeenshire, the teenage shop assistant operating the lottery machine mistakenly tear it in half and throw it away.

But the machine has also produce an automated message showing that the old man can continue to have this ticket and contact lottery operator Camelot.

The 18-year-old shop assistant get the pieces out of the bin and give them back to 67-year-old Mr Fred.

He realised the meaning of automated message when this retired Audi worker reached to home and checked the numbers twice. The message shows that he and his 57-year-old wife Lesley, had won the jackpot and were at the point of becoming multi-millionaires.

“Lesley was snoozing so I thought I would look at the website to double-check the numbers and sure enough, the first matched, then the second matched, match, match – we had them all,”

“When Lesley woke, I explained we had a winning ticket and what had happened. I showed her the numbers, asked her to check and she misread them, thinking we were £5.7m richer rather than an amazing £57m.”

“I felt really calm at that point – I think it was just sinking in – so I then called Camelot and explained what had happened.”

After examining Shop’s CCTV footage, a spokesman for Camelot explains winner couple that a range of security checks need to take place before the huge pay out as the ticket was ripped in two.

“We are so glad to be able to pay Fred and Lesley this amazing sum,”

“It is essential that we ensure we are paying the rightful ticket-holder, and in situations like this it can take a little time for these investigations to be completed.”

“To hear it was £57m was just amazing, and for a local couple, it’s even better.”

A young shop assistant Sean Grant has also expressed his excitment over the scale of the prize.

“I definitely won’t be ripping them up (in future).”

Said teenager, thinking of his “honest mistake” in case of Euromillions winning ticket

After becoming millionaire, Mrs Higgins has quit her job as account manager at Montrose Port Authority. The Lucky lottery winners are now considering trips to China and India, and may be looking for second house in Barbados.