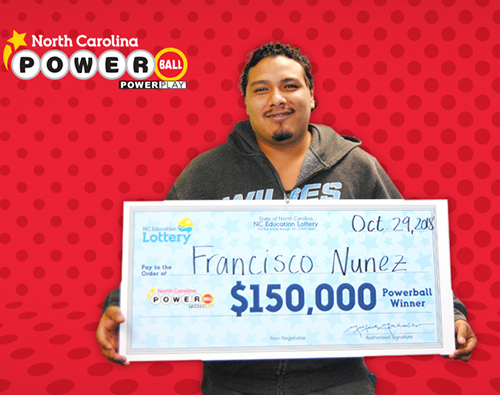 The lucky winner, who works at Tyson Foods, realized that he won Saturday drawing while playing video games on Sunday morning.

“I was just hanging out, playing some video games online,”

“I was getting bored, so I decided to check my email. I had an email from the lottery that said I was a winner and my prize was over $600. So I logged in to my account online, and I started shaking when I saw the amount I had won.”

Nunez immediately ran over to his girlfriend, Amy and asked.

“I was in complete shock,” Amy said. “I mean, you see it happen, but I never expected it to happen to him! It’s unbelievable. I’m so excited!”

Nunez claimed his prize on Monday at lottery headquarters in Raleigh. Nunez took $105,752 amount home after state and federal tax withholdings. He wants to spend some of winning amount to help his family.

The blessed lottery winner’s $3 Power Play ticket was one of three in North Carolina that matched four of the white balls and the Powerball in the drawing to win $50,000.

As he purchased the Power Play feature, the prize became $150,000, triplet to win amount, when the 3X multiplier was drawn.