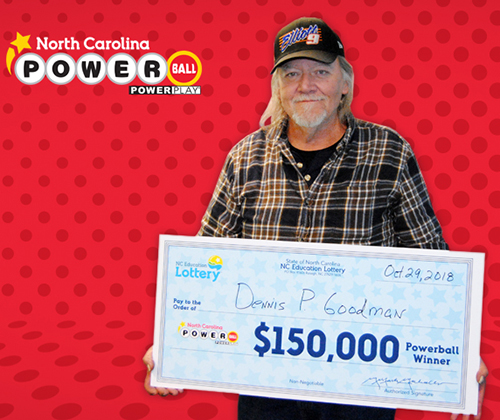 Dennis Goodman, a man from North Carolina, USA, was not able to believe that his bad luck completely turned in to good luck.

The new lucky winner said he was so unlucky that he told his sister to buy her own ticket for Powerball drawing on Saturday because he believed she don’t want his bad luck to touch it.

But The Landis man Mr. Goodman’s luck changed on Saturday night’s drawing when he checked his ticket. The result made him one of the luckiest Powerball players in North Carolina now.

“She didn’t believe me. I had to show her the ticket. It was a real exciting time. I didn’t expect to even get my money back.”

This lucky Powerball ticket is one of three in North Carolina that matched four of the white balls and the Powerball, beating offs of 1 in 913,129. Though that wins him $50,000, the power play feature was purchased and the 3X multiplier makes him Powerball winner of $1,50,000.

The ticket was purchased from Love’s Travel Stop on Peeler Road in Salisbury. He received just $105,752 after taxes withdrawn.

Goodman said he is planning to use his winnings to pay off some outstanding bills and get some dental work done. The Powerball winner spent his prize money to fix up some old cars including his 1994 Chevy S-10 with 230,000 miles on it.

The lucky lotto winner also wants to spend this prize for fun as he said he would take a week off to spend time on beach doing pier fishing.