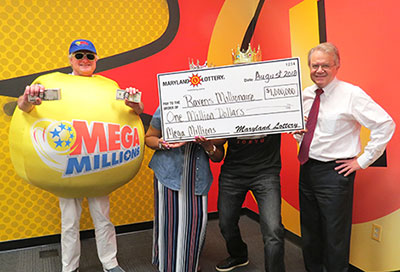 A Baltimore Ravens fan is in dreams after becoming the only U.S. winner player as well as Maryland’s newest millionaire on Friday drawing night.

His Lottery luck connection took place at an Indian Head store only days before the drawing.

“After waiting for a buddy who has classic cars, I figured I’d stop by Lee’s Market to get my numbers,”

The 58-year-old engineer gave himself a nickname “Ravens Millionaire” for Lottery publicity. The loyal lottery player has purchased a few Powerball tickets and a single Mega Millions ticket at the store.

The man took a visit to his mom last weekend when he checked his $2 quick-pick Mega Millions ticket and few others to see if he got any luck.

“My sister, brother and dad were at the table watching mom eat a taco salad,” he said. “That’s when my sister and I decided to check our tickets online. To my surprise, my Mega Million numbers came out as straight as an arrow. I was calm about it and called my wife, who didn’t answer, my son, who didn’t answer and my daughter, who didn’t answer!”

The millionaire old man, who was just one gold star far of winning the $63 million jackpot of Mega Millions lottery, arrived at Lottery headquarters on Monday along with his happy family.

The family was in the winner’s circle with visit of two special guests. One was Gordon Medenica, Mega Millions Lead director and director of Maryland Lottery and Gaming, and another guest was the Mega Millions mascot. Both congratulated this happy winner family.

“What a great day for our newest millionaire,” Medenica said. “This win couldn’t have happened to a nicer player. We’re always glad to hear the story behind our winners’ Lottery luck and learn how the prize will enhance their lives.”

So called “Ravens Millionaire” has plan to buy new cars for his wife and son and to invest most of his prize money. “Winning this kind of money is quite exciting, especially with all of the possibilities it can bring,” he said. “Life will definitely change a little but I’m still the same guy.”

His Charles country retailer found himself very lucky for this big win. For selling $1 million ticket of Mega Millions, Lee’s market that Located at 4310 Hawthorne Road in Indian Head, earned a $2,500 bonus from the Lottery.

No one was lucky enough to win the jackpot. This was the 3rd time when Maryland’s player win $1 million playing Mega Millions.