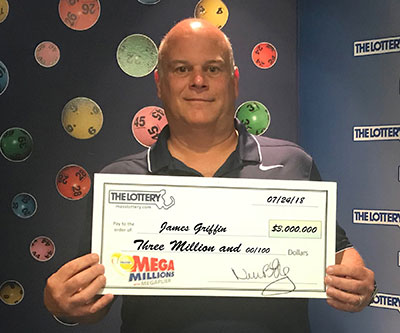 A lucky player has matched the first five winning numbers and the Megaplier option in the multi-state game’s drawing.

He purchased the winning ticket from at Lanzilli’s Grocery, 931 Bennington St. in East Boston. Griffin choose his lucky numbers based on family member’s birthdays.

The store from where he bought $3 million ticket, will receive a $30,000 bonus for its sale of the ticket. Since 2013, this store has sold six tickets that won prizes of $1 million or more. The other five, including a $10 million prize in 2015, were all won on instant tickets.

The mega millions winner played the Megaplier option buy spending additional $1 and triplet the winning prize from $1 million to $3 million. The Megaplier number he chose for this drawing was 3.

2, 3, 4 or 5 all can be the Megaplier numbers and applies to all prizes except the jackpot prize. Griffin claimed his $3 million prize minus tax withholdings at the Massachusetts State Lottery’s Braintree headquarters on Wednesday. This millionaire has plans to invest his winning amount.

You could be the winner next time, Try your luck !!! Play Megamillions online @ buyonlinelotto